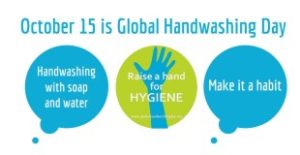 What are the aims of Global Handwashing Day?

Why was Global Handwashing Day created?

The campaign was initially created to reduce childhood mortality rates related to respiratory and diarrheal diseases by introducing simple behavioural changes – hand washing with soap. This simple action can, according to research, reduce the rate of morality from diseases by almost 50 per cent.

ABMA Education Community Development and HIV/AIDS Management learners will be especially aware of the importance of this simple yet effective process. Handwashing education is essential to stop the spread of diseases in our communities.

Handwashing with soap is estimated to reduce incidents of diarrhoea by 30% and respiratory infections by 21% in children under the age of five.

Did you know 242 million school days are missed each year because of diarrhoea, which handwashing with soap can prevent.

It is important to turn handwashing into a habit.

It is down to all of us to ensure that handwashing with soap particularly before eating and after using the toilet becomes an ingrained habit.

It is believed that handwashing can save more lives than any single vaccine or medical intervention.