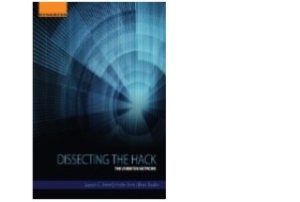 Dissecting the Hack: The V3rb0t3n Network ventures further into cutting-edge techniques and methods than its predecessor, Dissecting the Hack: The F0rb1dd3n Network. It forgoes the basics and delves straight into the action, as our heroes are chased around the world in a global race against the clock. The danger they face will forever reshape their lives and the price they pay for their actions will not only affect them, but could possibly shake the foundations of an entire nation.

The book is divided into two parts. The first part, entitled ‘The V3rb0t3n Network,’ continues the fictional story of Bob and Leon, two hackers caught up in an adventure in which they learn the deadly consequence of digital actions. The second part,’ Security Threats Are Real'(STAR), focuses on these real-world lessons and advanced techniques, as used by characters in the story. This gives the reader not only textbook knowledge, but real-world context around how cyber-attacks may manifest.

Drawing on ‘The V3rb0t3n Network,’ STAR explains the various aspects of reconnaissance; the scanning phase of an attack; the attacker’s search for network weaknesses and vulnerabilities to exploit; the various angles of attack used by the characters in the story; basic methods of erasing information and obscuring an attacker’s presence on a computer system; and the underlying hacking culture.

All new volume of Dissecting the Hack by Jayson Street, with technical edit by Brian Martin uses actual hacking and security tools in its story – helps to familiarise readers with the many devices and their code features cool new hacks and social engineering techniques, in real life context for ease of learning.